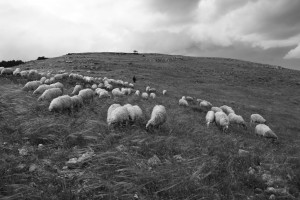 The past keeps flowing through us with a hundred waves; we ourselves are in fact nothing but what we perceive of this flowing second by second. (F.Nietzsche)

SYNOPSIS For hundreds of years, on the Murgia plateau, on the border between Apulia and Basilicata (in the south of Italy), man walked with his flocks, under the sun and wind. Today, an old shepherd is stubbornly repeating the same gestures and meeting the same fate as his ancestors. A fate made of sky, rocks and solitude.

DIRECTOR’S NOTE We grew up listening to the tales of our fathers and grandfathers. They were country tales that told about earth and skies, flocks and wheat, men and women at work, songs and feasts, death and suffering, about an animated, unchanging world. This is how we grew up; our child’s fantasy was sparked by barbarian tales and by names of characters and places coming back to mind with a mysterious and inscrutable charm, names that we have never forgotten. Our imagery was as wide as that shabby piece of Murgia where our roots are, a piece of land that meant more than the entire world for us. We grew up this way, by grafting ourselves on our stump.

And while we were growing up, everything around us changed forever. During the 60s and the 70s our fathers started deserting their lands and our grandfathers remained alone to preserve a cultural, social and economic heritage that seemed to be empty by then. Cities were becoming crowded, and factories too. Then the 80s saw the spreading of commercial television and of commodity fetishism that triggered a devastating process of anthropological mutation. A whole world, the rural one, disappeared, swept away by the flood of a new imagery ruled by the Money god and made of brands, spangles and strobe lights. By then, we were grown so much that we did not know anymore who we used to be and where we came from.

This is how we made our entrance in the world, forgetful of ourselves, driven by our curiosity about life, fascinated by the cities, by the opportunities, by the encounters, involved in the wild transformations of reality. We walked as long as we could, tirelessly, through the streets of the world. Yet, some longing kept consuming our hearts, something we could not explain. It was then that we first experienced how bitter is when you feel lost, when you do not recognize and understand yourself anymore. We discovered solitude and the absence of belonging. We found ourselves irremediably lost in a glittering hall of a crowed hypermarket.

And we defended ourselves as we could: with music, books, cinema, and then with politics, ideology. We have built paths of resistance and new imageries for new possible worlds. Along this way, we have slowly recovered and understood ourselves again. Just a few of us indeed. Since, on the way, we had to learn to acknowledge the defeats, the betrayals, the slogans’ emptiness, the cultural barony, the commodification of thought. Although there were only a few of us, we did not lose heart because, in the meantime, along the way, we had found our lost fathers and ancestors. They were in Pavese’s writings and in Scotellaro’s lines. They were the men and the women of De Seta’s films. They were in the boundless American fields of Terence Malick. They were in Matteo Salvatore’s songs. They were with Di Vittorio during his struggles for the land and for the workers’ rights and in Gramsci’s thinking, which, from the prison of an Apulia’s village, shone upon the future world. They were, even earlier in the past, in the Italian resistance, which transformed our forebears from peasants into brigands. So many stories, still to be told, have come back to the surface from the depths of our memory, like stones unearthed by the ploughshare.

Here is how it happened. Tired of our rooms, of our screens and of our mobiles, one day we got into our car and went westwards towards the sun, leaving the city, its traffic and all the infinite connections of our modernity behind. We always took the least beaten track, the most deserted one, where the asphalt was in bad condition and there were no road signs. We drove on aimlessly, through endless fields, derelict farmhouses and disused rails. When the sun began to decline, we left the car and climbed a hill. From the top, we could see the Murge plateau. Down below in the distance, many white dots, mingling with the white of the calcareous stones, moved in unison with a black dot at the head – the shepherd. We went towards him. We too, then, had gone back to the house of the father.

Via Emilia Doc Fest | Online | IT